Straight off the bat I can tell you two things:

This is easy. There are a ton of sites. I downloaded 3 free ones, then also bought one to see the comparison. Average prices for 28mm figures are around U$5 which I thought was very reasonable.

I downloaded the free ones from https://pinshape.com/

I paid for one from https://www.myminifactory.com/

For this, I found someone local who was recommended.

I emailed him the files, paid some money and he printed them for me. “It’s fine, you just snip off all the scaffolding and file it down”

It’s not actually fine. It’s like being given a present by a sadistic cousin who double and triple wraps it and also uses duct tape. One’s eagerness to see the actual model has to be tempered by taking care not to damage anything. 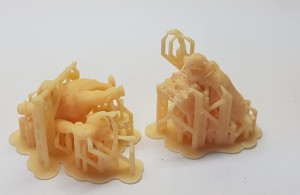 After much careful clipping, the model is revealed At this point, the effort/reward seemed painfully skewed towards effort.

It looked pretty meh, and the face did not look like it had any detail at all.

But I decided to give it an undercoat as the resin is semi gloss and I thought it might be hiding detail. This was a great choice as the undercoat really brought out the details and frankly, I was amazed at it.

If you click on the bottom picture you can appreciate the little details on her grenades and boots. Far better resolution than I was expecting.

My thumb is for scale. These are the Victorian / steampunk figures that I thought would add character as Necromunda civilians.

The models are great but had a lot of very think pieces and plenty of these got broken off when I was removing the scaffolding.

The poor pooch has no feet and his owner has lost the top of his club.

The fisherwoman has lost her right foot.

This has a lot to do with my inexperience in removing the moulding, and also my choice of model. These were going to be a hassle but I chose them because of these details to see if it was possible to make things that small 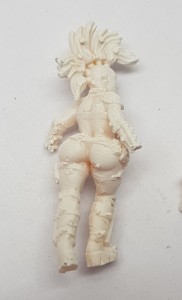 I now have to go back and remove all these little nubbins where the scaffolding was connected to the model. I guess this would be fine if this was some single fantastic model that you bought and printed and you were going to lavish attention on, but there is no way in hell I am signing up to do an entire army of these

The technology is amazing, and it is easy to find models and get them printed. But that is only the start. You have to really love the process of slowly and carefully unearthing them from the scaffolding and this is really not for everyone. Certainly not for me.

Say what you want about GW but also make sure you add that their model quality is staggeringly good, and they are generally easy and fast to build.

Now…. on to painting