Painting the ziggurat with spray paint

A quick look around the web will show you plenty of tables covered in lovely MDF scenery that is mostly unpainted.

There is a good reason for this – scenery pieces have large flat areas that are intimidating (and expensive) to paint with a brush and hobby paints.

Also, given that you might have several pieces from the same range that you want to tie together with a similar paint scheme, the whole project can start to look overwhelming.

One option is to use aerosol spraypaints. These are cheap, can be purchased at any hardware store, and come in a fairly good range of colours.

Yes, you are right This is not meant to be an award-winning paint strategy. It is meant as a quick and easy way to turn a large number of unpainted models into something table-top ready. 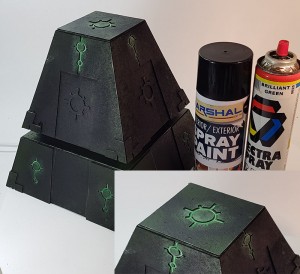 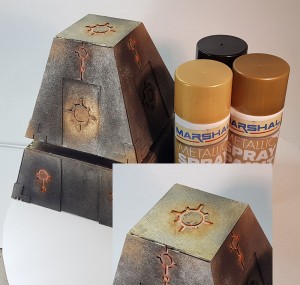